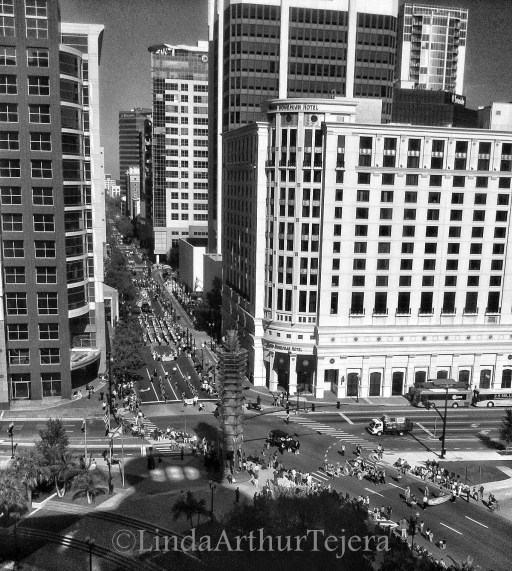 This is my first time to post to this. I had seen her blog and thought it would be something really fun and different. Since I just recently acquired an iPhone 5, I have not taken many photos with it yet. But I went back through some of the photos I had from my iPhone 3Gs and decided to try this. I used the Snapseed App to try to work it up a bit and make it more presentable. I’m new with that, too.

My photo was taken during a lunch hour from an 8th floor conference room on South Orange Avenue in downtown Orlando, Florida, probably around 2008-2009. I can’t recall the holiday but, as you can see, there was a parade, which was what drew me to the conference room in the first place!

A little background as to why I chose to post this photo. When I first came to Orlando in 1994 and started working downtown, it was completely different. It

had a few “skyscrapers” but nothing like what it has become. Thumbnails are inserted to try to give a bit of reference. Orange Avenue, which is the main street (one way) through town, was more open and airy. I changed jobs in 2000 and did not have reason to return downtown again until the end of 2004. In my absence from downtown, and in my humble opinion, the City managed to completely obliterate most of the light from Orange Avenue by constructing rows of tall office buildings on both sides of the street. And major downtown construction continues.

With the “new” downtown, driving to work in the morning on Orange Avenue felt so claustrophobic to me. They had made it dark and dreary. Of course, my pictures were taken during the noon-day sun. I’m sure there are many who would definitely disagree with me about the dark and dreary and that’s okay. I did not think it was an aesthetic improvement. But, then, I’m one of those who prefers the vintage style in just about everything – including architecture! Oh, well. Such is progress, I’ve heard it said.