All photos taken with my iPhone5. 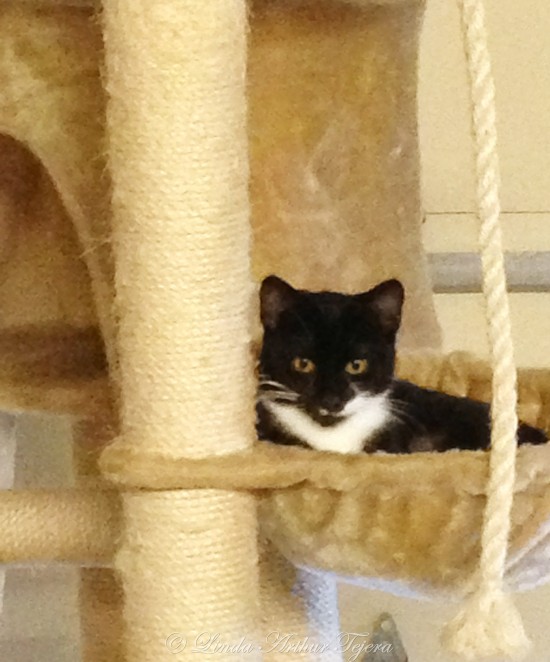 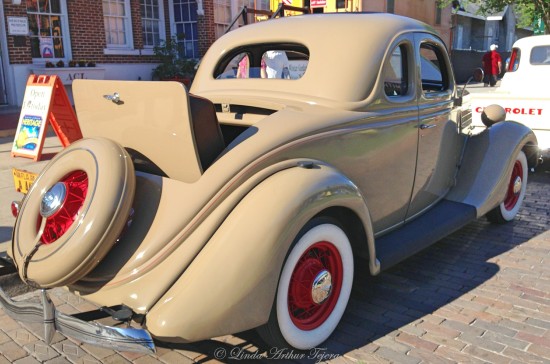 I’ve had these photos for a little while and finally decided that the only thing they’re good for is Cee’s Odd Ball Photo Challenge! These mushrooms were growing out of the knothole in this old tree. I don’t think I’ve ever seen mushrooms like this. A few things passed through my mind while taking the photos — hungover sick tree; tree with forked tongue — you get the idea. 😛 😆 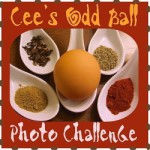 Ginger tabby is a coat pattern and not a breed, but any human who lives with one of these cats will tell you her baby has a distinct personality. Evidence is mostly anecdotal, but color and some aspects of temperament are genetic, so it’s certainly possible these traits are linked.

If you think your orange baby is easy-going, you’re not alone. In the early 20th century, George Ware, the owner of a cat boarding center, formed his own theory of color and temperament and described ginger tabbies as “big softies and laid back to the point of laziness. Like being stroked, but dislike being picked up and cuddled.” A 1973 book published by Pedigree Foods described ginger tabbies as “quiet, docile and affectionate.” In a recent study at the University of California, cat owners were asked to attribute personality traits to their cats. Orange cats were most often characterized as friendly. –[The Nest]

In 2010 we ended up with three little male tabby kittens in our garage who soon migrated into our home — two ginger, Charlie and Freckles, and one black, Moxie.  Here is a bit of their story. 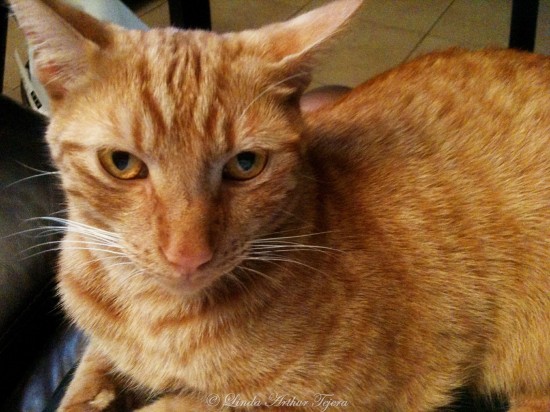 Freckles is our biggest cat.
You can see a short little video of Freckles here. 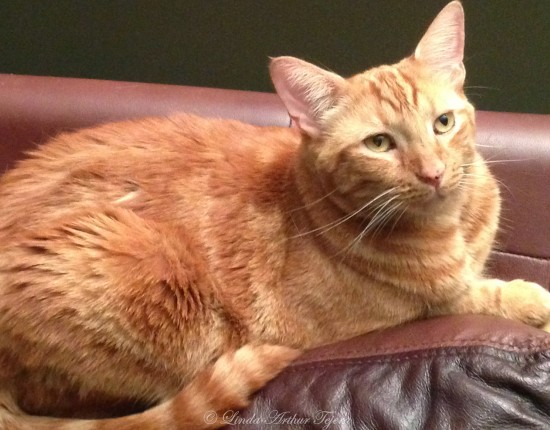 This is Charlie, Freckles’ brother. He had a bit of a rougher time when he was younger. He suffered from urinary blockage as a young kitten and spent two weeks in the hospital. It was touch and go. Even the vet wasn’t sure he could clear him up. But he’s a little fighter. That was in 2011 and he recovered nicely. We keep him on a special diet and he’s doing great. He always wants to be close but he doesn’t like to be picked up.
You can see some more shots of Charlie here. 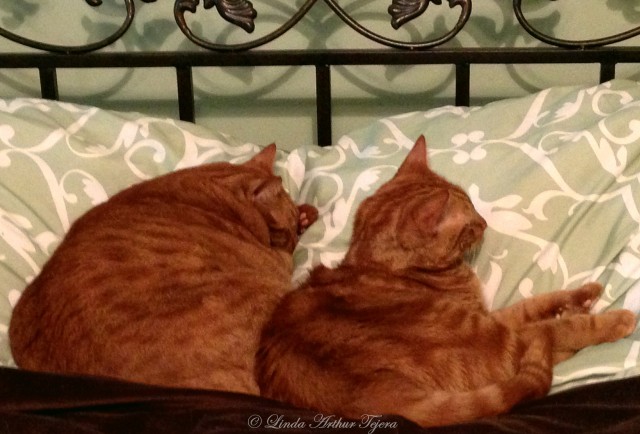 They love sleeping together.

I mentioned a third brother, Moxie, pictured below with Charlie. He, too, developed a urinary blockage shortly after Charlie. I’m sad to say we weren’t so lucky with him. We were not able to save him. 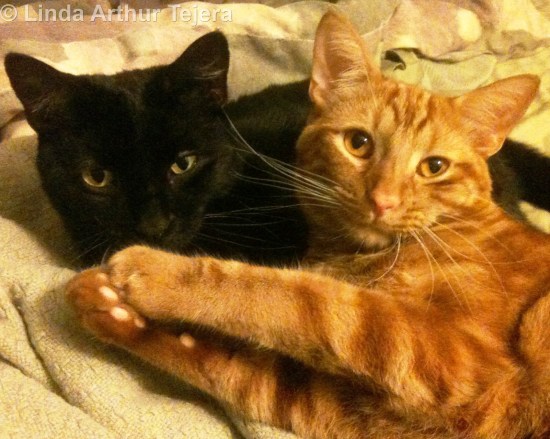 Taken with my iPhone5. 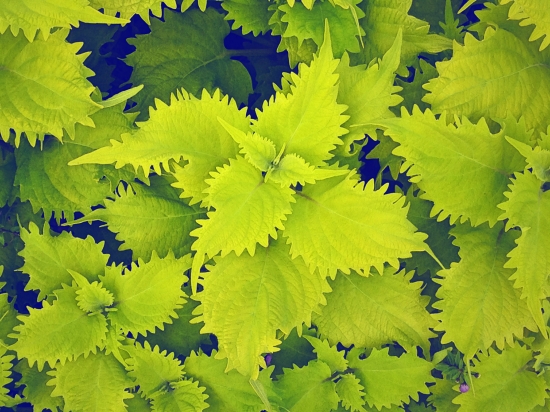 I venerate old age; and I love not the man who can look without emotion upon the sunset of life, when the dusk of evening begins to gather over the watery eye, and the shadows of twilight grow broader and deeper upon the understanding.

A black cat crossing your path signifies that the animal is going somewhere.

It’s true. I run a cat house. Pictured are two that I just happened to catch as I drove in the driveway (ergo, the grainy quality on an iPhone5 zoom!). I have seven indoor cats that I call my own and cannot add to that number now that hubby has been diagnosed as allergic. There are at least seven (five black and two tuxedo) cats/kittens outside who come for breakfast, lunch, dinner, snacks and bedtime. They are not mine per se. I can’t say they are feral as they have come to allow me to pet them and, a few of them, allow me to pick them up. Yes, I know, I’ve been told I need help. But, you see, they need help more than I do!

While driving to the store the other day, I had a close encounter of the memory kind. I’m driving along and suddenly something flew across my vision and onto my driver’s side car window (inside). Usually when I encounter flying bugs inside my car while driving, my initial instinct is to roll down the window and get them out. But, in my peripheral vision, I noted that this was no ordinary insect. This was a LADYBUG! Gosh, I haven’t seen one around in such a long time. The ones I was always used to seeing were red and black but that was up north. Perhaps the orange and black is the southern version? Or maybe the red faded in the hot sun! 😆 Childhood chants came flooding into my mind: 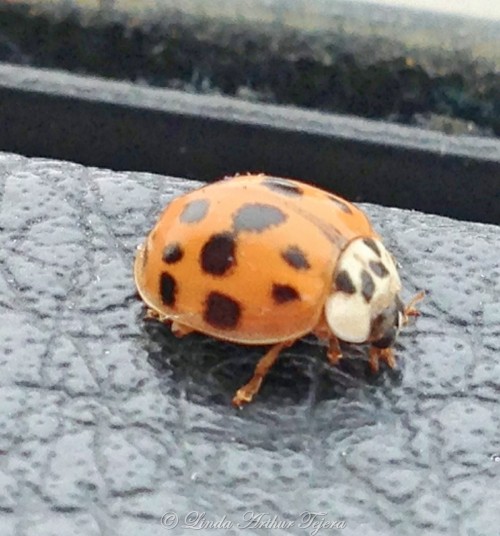 Ladybug ladybug fly away home,
Your house in on fire, your children will burn.

YOUR HOUSE IS ON FIRE, YOUR CHILDREN WILL BURN?? Now just how strange and morbid is that? All my life I’d said that superstitious little saying when I’d see a ladybug and never thought anything of it. Suddenly it sounded gruesome! I don’t think I was ever taught the last two lines. They’re just as bad:

All except one and that’s little Ann,
For she crept under the frying pan.

There were superstitious beliefs that it was unlucky to kill a ladybird [ladybug in the U.S.], and that the verse would make them fly off.  Another superstition states that you should chant the verse if a ladybird lands on you: if it then flies away again, your wish will come true. [This is the part I was taught!]

Ladybirds are useful as eaters of aphids, which would otherwise damage plants. They can also be a nuisance, but there would be logic from a farmer or gardener’s viewpoint in trying to shoo them away rather than kill them. This could be the rational basis for teaching children to respect them.

Hmm, I wonder if my wish will come true?

I found this short video showing in slow motion a ladybug taking flight. It’s actually after the 1 minute mark that it begins to fly!

In researching information on ladybugs for this post, I was amazed at reading and learning much of the history of some of these old nursery rhymes that children have grown up with over the past 100 years or so. If you’re ever curious, try Googling the titles of some of the Old Mother Goose Nursery Rhymes.

Ya gotta wonder sometimes…. Just what were they thinking??

Possibility. Opportunity. Potential. As another year gets underway, let’s celebrate the new.

For more information on participating in this challenge and/or to view additional entries, click on the logo.