Well, it’s been a most interesting week and a half.  I’ve mentioned on previous posts about the kitties who had taken up residence in our garage and how we had them spayed. Since we already had five cats, we had decided there was no way we could incorporate them into the household.  Sigh.  So, weekend before last, little Tippi (black & white) showed up for breakfast on Saturday with a limp. I could see no obvious injuries. So I hoped it was just a strain or something and would go away quickly. I got nervous because I didn’t see her again until Monday morning. She was still limping so I decided to take her to the vet. I also took Maggie because I thought I figured I should have them both with me in case I needed to have them tested for feline leukemia in case I had to bring them into the house while Tippi healed. It turned out her little foot was abscessed. So, in they came. I knew at that point, they wouldn’t be going back out on the streets! Tippi’s little foot ballooned up and finally the abscess broke. She’s all healed up now and getting inquisitive.

We set up an extra room we have for our new kitties so we could keep them separated from the other cats and dogs. After a few days, we opened the door but neither wanted to walk out. We put the little barricade up because it keeps out the dogs.  There are sliding glass doors from the room that look out onto the enclosed pool area and there’s a kitty/doggy door that goes out. Tippi has just now started going out to the pool area around the other cats. Maggie is still choosing to stay in her room even though she now has access to the house and pool area.  We’ve seen her sneak out into the hallway late at night when things are dark and quiet.  So, I guess it’s just a matter of time.  So far it seems like they’re going to incorporate into the bunch with little upset.  Fingers crossed!

Tippi adjusting to life on the inside! 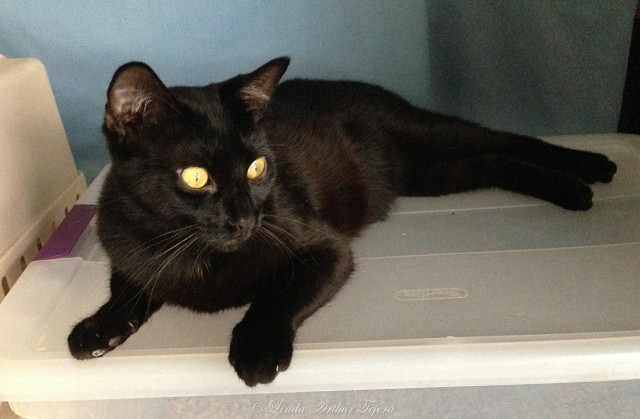 Maggie adjusting to life on the inside!