Growing up in a small town in the 50’s really did have that Mayberry feel to it. Most of the kids knew each other and hung out together at one point or another. It’s true when they say that everybody knows everybody else in a small town. That’s pretty good for the kids. I won’t speak for the adults – I didn’t live there as an adult!

School days were pretty regimented. Girls had to wear skirts and boys had to wear long pants. There were rules and regulations and the adults were treated with respect. By golly, it actually gave the teachers an opportunity to teach instead of constantly worrying about discipline and lawsuits. Okay, this isn’t intended to be a soapbox entry so I’ll get back to the story.

I walked to and from school each day, just under a mile each way. No, really! If I didn’t walk, I was riding my bike. At least it wasn’t uphill both ways although it did feel like it most of the time. Especially on Tuesdays and Thursdays when I had to take my violin. Those were the days I was always sick but couldn’t get my mother to believe me for some strange reason. But I walked to and fro through some of the coldest, snowiest days. This was Northwest Ohio after all. I will never forget the one afternoon I was walking home through the very deep snow. Try to picture this. I was always very small. I was probably not even four feet tall yet at ten years old. Here I am walking through the park on my way home after school. Suddenly I disappear into a snow bank. I’m not buried but I’m deep enough that no one can see me and I’m having a heck of a time trying to climb out. So, as panic began to set in and I didn’t want my body to be found in the spring thaw, I finally managed to claw my way out and make it home. Not one person I told my story to seemed the least concerned. I still remember that and I still remember the reality of my fear of the possibility of not being able to get out.

I thought so highly of my third grade teacher, Miss Spridgeon. Gosh, she was so pretty. I suppose I was called the teacher’s pet because I was always volunteering to clean the blackboards for her. She really set me on Cloud 9 when she told me one day that I reminded her of Grace Kelly. Everyone, even kids, knew who Princess Grace was. I look at my pictures and I just don’t see it. But I keep telling myself it must be in there somewhere! HA! No wonder she made the top of my favorite teachers list! And all the while I’m sure it was a ploy to build my confidence. It worked!

Naturally, recess was our favorite time of day and it came once in the morning and once in the afternoon. Since that time all of the playground equipment we played on has long been destroyed as being unsafe for children — 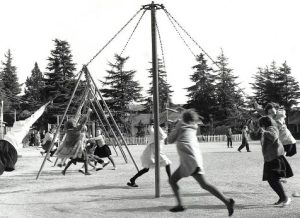 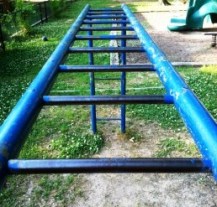 A lot of the time was spent playing girls after boys. Yes, you read that right. Girls after boys. We would chase the boys around the playground. What would we do when we caught up with the ones we were chasing? Why, we’d hit them on the arm, of course. What else would you do to the boys you liked? Silly!

Since my best friend, Mary Beth, lived across the street from the school, a lot of our afternoons were spent participating in the national pastime: 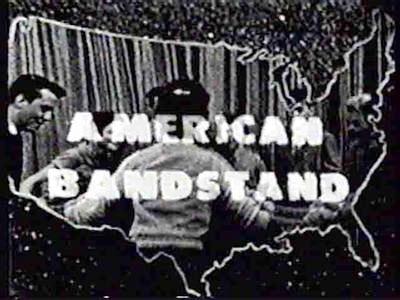 I don’t know about the rest of the nation but watching Dick Clark and his American Bandstand is how I learned to jitterbug! Of course when you’re 8-12 years old there’s really not much call for the jitterbug. Truth be told, it was years later before I discovered that I had learned it backwards from the TV! It turns out it didn’t matter anyway. By the time I was ready to rock and roll we were experiencing the British invasion and we were twisting the night away or doing the Bristol Stomp among other dances!

School’s out, school’s out, teacher let the monkeys out. Now who on earth made that one up? And to think we used to chant that when we were kids. We didn’t even know we were insulting ourselves. Kids sure were naïve then.

We had about three months of what we called freedom. And one thing is for sure, we didn’t spend it lying around indoors in front of a TV screen. Almost every day, we’d be out the door early morning, meeting up with friends either at somebody’s house, at the YWCA or at the school playground for a day of play. Our days consisted of roller skating or swimming at the Y. We would play ping pong or checkers at the Y or badminton at someone’s house. We would go to the school playground and play on the swings or the jungle gym or the merry-go-round. Or we would just walk around town and visit friends. We were always on the go. The rest of the time we were off riding our bikes.

There was lots of bike riding around town. I don’t remember which Schwinn model I had. I just remember it was turquoise and chrome and had the carrier on the front like the one in the picture. I sure loved that bike! A bunch of us used to gather over on Race Street. What an appropriate name. It had a sort of incline. I don’t think I’d go so far as to even call it a hill! Man, was I crazy. I used to get my bike going as fast as I could and then do crazy things like let go of the handlebars or take my feet off the pedals or both! Sometimes I would hold the handlebars and stand on the seat. I think back now and my poor Guardian Angels were working overtime. One little rock in the road and I would have been a grease spot on the road. But all went well. I still marvel at our bravery (stupidity!). Ah, the foibles of youth. Youth knows no limits. There’s no such thing as mortality when you’re a kid. I suppose that’s why we can usually get away with so much more.

There’s nothing more fun for young girls than getting together and spending the night together to giggle and talk about growing up, watching TV and driving their parents crazy. Something inevitable is always bound to happen. Not anything drastic but usually just enough to get into some kind of “trouble”!

I remember one night Mary Beth was spending the night with me. My mother had this beautiful black ceramic cat that curled around a glass fish bowl. Instead of keeping fish in the bowl, she had several colored glass balls in the bowl. I loved that statue and knew better than to mess with it. But I had company and, of course, wanted to show it off. Well, wouldn’t you know, instead of just pointing out the piece, I just had to pick up the bowl. CRASH it went and shattered at our feet. Of course, it just had to be one of Mom’s favorite pieces. Once she determined that neither one of us was hurt, she made us go to bed – lights out for the rest of the night. Bummer! Poor Mary Beth. She had nothing to do with it. Ah, but we survived!

And then there was one time when I was sleeping over at my friend Carrol’s house. It was a Friday night and guess what was on TV? Here’s your first clue!

Picture this. Here are two little girls all decked out in their pajamas huddled on the sofa in a pitch dark living room in front of the old black and white TV. Shadows bouncing on the wall from the TV.

We are so intently watching Godzilla. Yes, I said Godzilla. Everyone else has gone to bed. It’s just the two of us – or so we thought. We’re getting to a really scary part of the movie and BAM! Up from behind the couch roaring his head off comes Carrol’s older brother. Picture two little girls screaming their heads off and waking up the entire house. I don’t remember how long it took him to stop laughing. And, if I remember correctly, Carrol and I were the only ones not laughing when it was all said and done. Yes, folks, that stuff really happened in the 50’s. Kids were gullible. I’m here to testify to it.

There are so many thoughts and stories to be written down and shared about living in and growing up in a small town in the 1950’s. It was a wonderful time. It was a different kind of time. I feel very blessed and fortunate to have been a part of that time. There are so many more things I could write and as time goes along I’m sure I will. I hope you’ve enjoyed my brief little trip down memory lane. Your thoughts and comments are always appreciated. God bless.

19 comments on “My Downtown Playground – Part 3”